I’m not only a refugee. As a human, I can help others

“I left Syria because I was looking for a better life. I felt danger back home and I just wanted to live peacefully.” Abbad is a 25 years old man who grew up in Damasco, the capital of Syria. In his search for a better quality of life, he started a long journey in which he experienced a lot of things.

“It wasn’t safe for me there because young men have to join the army. I talked with my parents about leaving and they always supported me in my decision. I wanted them to join, but despite the situation in Syria, they wanted to stay there.

A critical moment for me was one day during Ramadan. I was walking on my way to a shop when I came across the military who stopped me for no reason. ”Give us your phone”, they said to me. But when I refused they just took it from me. ”Walk away and forget about it or we will take you prisoner”, they told me. ”I couldn’t accept that so I fought them, and as a result, I got detained and they took me, prisoner.”

Luckily, when he arrived at the prison he encountered an acquaintance, who happened to be the person in charge. Fortunately, he helped Abbad and let him go free without any charges. “After that, I decided I couldn’t stay in Syria anymore, and 15 days later I started my journey to leave the country. As a human, I cannot accept what happened to me.”

“As a human, I cannot accept what happened to me.”

His first destination was Turkey but despite being a neighboring country, crossing the border wasn’t an easy task. He had to walk 50 kilometers around the control point in order to avoid the Turkish military. He learned about the routes through a smuggler who explained to him which was the best path to follow. ”And I am lucky he did because geography-wise I am not the best”, he says while laughing. Despite counting with that information, the Turkish army captured me five times while doing the journey and only the sixth time I managed to cross the border.

Once in Turkey, he stayed there for some months before moving again. “It wasn’t like I expected and I didn’t feel comfortable there.” At that time, he was working 16 hours a day, and sometimes was victim discrimination. Unsatisfied with his situation, he decided to move to Greece, where he stayed for 15 months before moving to his final destination: Belgium.

“Travelling with smugglers is extremely expensive and also I don’t like to travel with them.” That is why he stayed for longer in Greece, to get his documents to be able to move inside Europe without depending on the smugglers. While in Greece, Abbad helped other refugees with translations from Arabic to English.

“Helping them made me really happy and that encouraged me to keep on doing it. I learned that by doing something small for someone, I can make a big difference in their lives.”

After getting his papers, Abbad moved out of Greece and got asylum in Belgium. He chose this country because of Brussels and its international culture. “Everyone here can be free, and they can believe in what they want”, he says. Unfortunately, he did not arrive directly to capital, but instead in a camp close to the border with Luxembourg.

“It was in the woods really far away from Brussels. I was surrounded by African guys; with whom I couldn’t communicate with. They all spoke French and could not speak another language.” While being there he didn’t have much to do, so he trained himself reading English books and translating everything into Arabic. “If you just stay there without doing anything you will become crazy”, he says.

Nowadays Abbad is busy following English and French courses five times a week. His passion for languages is such that now he wants to change his profession from mechanical engineer to professional English-Arabic translator.

Abbad did some small jobs in the camp to collect money with the aim of coming to Brussels. In one of his visits, he came across one of our projects, Cafe Lingua, where he holds conversations in English to improve his language skills.

After that first interaction with Serve the City, Abbad knew he wanted to keep in contact with us and that is how he became a volunteer. He takes part in many of our projects, but one he enjoys a lot is CollectMet, where he collects vegetables from the market in Anderlecht to make sure that food is not being wasted.

“I don’t want to just eat, sleep and work. I want to be a useful person. I’m not only a refugee. As a human, I can help others. Citizens or refugees, we are all the same.”

Even after all he went through, Abbad gives back to the community by helping in whatever he can. He puts his grain of soul to make this world better and he doesn’t set excuses when it comes to helping one another. As he said: “I’m not only a refugee. As a human, I can help others.” 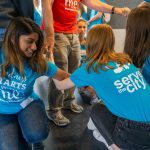 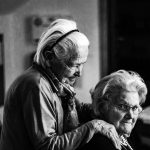 Here I have a second familyStories