Volunteers at Project Le Phare prepare and distribute sustainable and vegetarian meals through personal interactions with their beneficiaries in the neighbourhood of Sainte Catherine. The project restarted in 2012 as a collaboration between Serve the City and the Salvation Army. Today, the project serves up to 300 people weekly, on Tuesdays and Fridays.

Jennie started volunteering at Project Le Phare in 2013, around 3 months after she and her husband moved to Belgium. She wanted to get involved in her new neighbourhood and had heard about the project from a friend. In 2015, she started to co-lead the project with Marie, another volunteer.  5 years later, in January 2020, Marie handed over the lead of the project to Jennie. “It was a very easy transition,” Jennie recalls. As usual, volunteers would come every Tuesday to prepare hot meals at the Salvation Army offices, and serve them in the dining hall, where they would welcome around 120 people. “Everything was running smoothly. The only problem was… COVID-19”.

Only 3 months after becoming project leader, Jennie was faced with an enormous challenge: how to continue the project safely? Thankfully, Le Phare was among the only three projects in the commune of Brussels to be given permission from the local government to continue their action. “We were each given a special document that allowed us to gather and distribute food. I was also given a special permit to get food and other goods, as they were restricted during the first lockdown (…) It was never a challenge to purchase food… The real challenge was to buy paper products, since our usual stores were closed. Volunteers had to ask their neighbours and friends for plastic bags so we could wrap the meals and hand them in to our patrons.” Getting her hands on masks, gloves and hand sanitizers was also a big challenge. “There was a sense of desperation… but the collective efforts from our team was a very powerful element, which created a sense of absolute hope, very much conveyed by our patrons”.

Thankfully, donations to the Salvation Army and Serve the City allowed them to stay afloat. Many people also directly donated to Project Le Phare, which received hundreds of baked goods, tents, clothes, shoes, blankets, etc. “It really made a difference. Over a hundred people contributed! Even with the sanitary measures in place, people found a way to play a part and make a difference. We also started to get tons of requests to volunteer and get involved. We couldn’t accept everyone at the same time as we needed to strictly respect the sanitary measures.”

Very quickly, they decided to add a service every Friday as well. “We added Fridays because we had the manpower, the paper products, and the patrons.” Indeed, the numbers of beneficiaries drastically increased throughout the crisis. “Before Covid, the maximum number we would get would be 120. During Covid, we reached up to 180 people on Tuesdays, and around 120 on Fridays.”

When asked about how she managed to keep the morale of her team up during the crisis, Jennie says: “It was really easy! While most of the world was experiencing a very strict lockdown, we could get away with socialising. We had our little social club. We were able to build friendships, serve people and make a difference. It was very positive and empowering. We also got to know our patrons even better, we would remind them that they were not forgotten and that we were all in this together.”

“What would I tell someone who wants to get involved but is afraid to start volunteering? Just do it! Volunteering is like going to the gym for the first time. If you do too much too soon, you won’t go back. But you can start slow, like once a week and do whatever you can to contribute. There is a misconception that volunteers have to think or be a certain way. Just be yourself!”, she concludes. 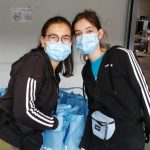